My Husband is a better Mom

Kidding, sort of.  I have been knocked down with an upper respiratory infection since Saturday.  I had a fever and still have an obnoxious cough, plus the medicine they have given me seems to make my stomach upset.  Whiny enough for ya?  It's small potatoes compared to what some of my friends are dealing with, but it still sends the family routine into a frenzy.  I am thankful that my husband is very hands on.  When he realized I was down for the count on Saturday, he sent me to my room and took care of the laundry.  (it was an especially good day in husband land)  He was able to accomplish an incredible amount in much less time than it usually takes me.
I should be happy, right?  No, I was sick and thoroughly depressed that he was better at my job than I am.  How on earth could he get so much done?  So I tried to take an objective look around the house. (shuffling around in my bathrobe) Guess what?  Every room in the house is neater than my side of our bedroom is.  And don't even get me started on my desk.  Is this because I am the messiest person in the house?  (twenty years ago this would have been true!)  No, it's because I help everyone else get their stuff cleaned up, then I don't want to deal with my own stuff.  It doesn't make sense that I help my daughter clean her room instead of taking care of mine.  I realize that I should be able to do it all, but I am not that woman.  Thankfully my husband knew he wasn't marrying that woman.
Now I have to come up with a new mental cleaning schedule, and my stuff will be closer to the top of the list.  I might even have to write it down on actual paper for a couple of weeks until I get in the habit.  I know I'm not the only one who deals with this.  I don't have to come first, but I have to not always put my stuff off til the last (when I am inevitably tired of cleaning).  What about y'all? Anyone have a schedule they use?
Posted by Amy @amymchodges at 6:02 PM 3 comments: Links to this post

Last weekend I was able to escape from my daily life for a getaway to Disney World with my husband.  Our primary reason for going was the D23 Flowers and Fireworks event which was incredible.   When I got home I helped proctor for the end of grade tests at my daughter's elementary school.  3 days later I came down with a terrible upper respiratory infection!  I share this just in case there is anything too bizarre in the video~I was editing under the influence of cough syrup.  I had a blast making it, but I am still figuring out the software options so I apologize if it's too crazy!  Big thanks to Amanda at www.ohamanda.com for hosting the Top Ten {Tuesday} every week.  Go to her site to find some other great top tens about all kinds of things!

Posted by Amy @amymchodges at 9:46 PM 3 comments: Links to this post

Email ThisBlogThis!Share to TwitterShare to FacebookShare to Pinterest
Labels: D23, Disney World, Getting Away, travel

And my delighted reply is, YEP!  I love Walt Disney World and thankfully my husband has acquired the same feeling.  We go whenever we can, which recently has been frequently.  We went last summer with the kids and had a great trip.  John and I were able to go for a quick trip for a D23- the community for Disney fans event at the Food and Wine Festival.  We returned over Halloween weekend (which is also my husband's birthday weekend!).  I thought we were done for a while, but then the opportunity for the Disney Social Media Moms event arose.  Who is going to turn that down?

Now we, just my husband and I, are returning for another D23 event.  We have a great friend who stays with our kids.  How do we get away with leaving them at home?  This time it's simple.  The event we are attending is called "Flowers and Fireworks".  My kids do not appreciate fireworks.  I wish they did because I love fireworks so much, but we usually end up watching them outside the park.  They whined once when we told them we were going, but all it took was the mention of fireworks and they were fine.

The last D23 event we attended was amazing so I am looking forward to what this one is going to bring!  I will be trying to update so check back in if you want to hear about it!
Posted by Amy @amymchodges at 8:01 PM No comments: Links to this post

It's Monday Mingle time!  It's sponsored every week by Jennifer at www.eightymphmom.com, she posts three questions for everyone to answer.  The mingle is a great way to get more comfortable with vlogging and it's a great way to get to know other bloggers.  Thanks Jennifer for hosting!!
Posted by Amy @amymchodges at 6:47 PM 4 comments: Links to this post

In the course of my great adventure helping my parents sort through my late grandmother's belongings, we sometimes feel like archeologists.  Recently I found a Woman's Day magazine from January 1965 and flipped through it fascinated with how different some things are and how some things are still the same.  This Jello ad caught my eye. 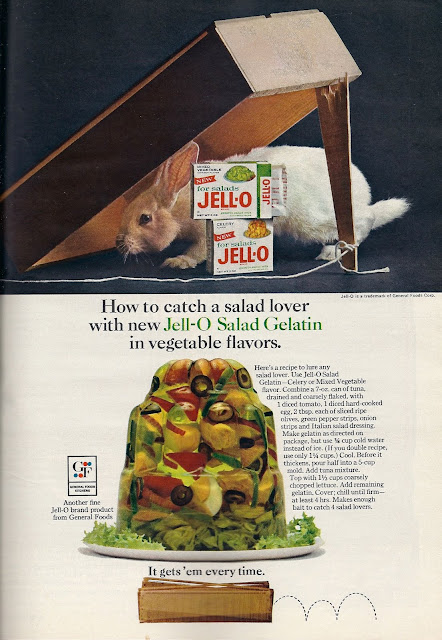 That's right, tuna salad in mixed vegetable flavored jello.  Just in case the type is too small for you to see, let me show it to you closer up. 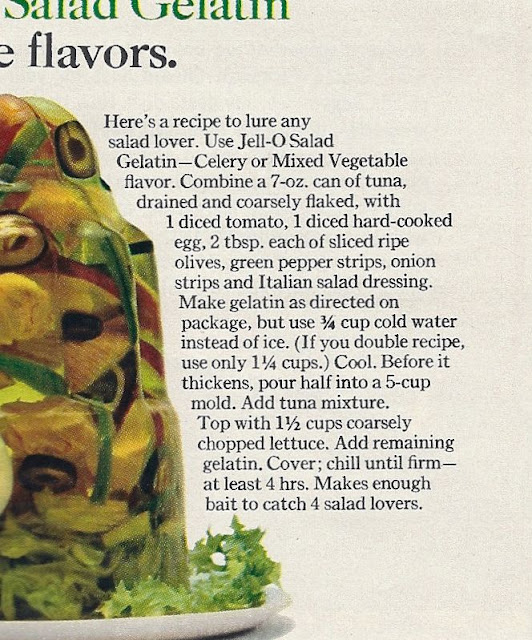 I have heard complaints from people about their moms fixing tuna casserole too often during their childhood, but this was brand new to me.  Tuna, boiled eggs, olives, Italian dressing, and Jello.  I want to know who pitched that recipe to the Jello folks.  What brilliant chef decided that all tuna salad needed to give it that special touch~wrap it in Jello! I am intrigued and repulsed at the same time.  So, no, I don't recommend this as a special Mother's Day recipe.  Sorry if I grossed anyone out, I'll try to make up for it tomorrow by posting my favorite chocolate pound cake recipe!
Posted by Amy @amymchodges at 5:13 PM No comments: Links to this post

Along with confronting my fears about horses, I had the chance to face another fear this week.  My parents have a house in the mountains of North Carolina. (just happy to be related) It's the best of both worlds since we live at the beach and have access to this beautiful home in the mountains.  The house is in a small valley that has a small town, a college and a conference center.  In the summer, the conference center is bustling with activity and people are everywhere.  Every other season but summer and it feels deserted.  Their house is on a gravel road with 3 other houses but theirs' is set apart enough that you feel totally alone.

A few years ago the house flooded from a split hose on the washing machine, and it wasn't found for days.  The house had a lot of damage, but my mom chose to see it as an opportunity to change some things around.  (she loves to remodel)  The work was completed and I was in town for a meeting, but staying at the conference center because the house is too darn big for one person.  After our meetings one night, four of my friends and I snuck away to the house so they could see all the work that had been done.  It didn't start well, one in our party thought she saw a light on which was suspicious.  After laughing at my paranoia, another of my friends charged in and stopped immediately because a door on the back side of the house was wide open!!  At this point, I was ready to either run for the car or call the police.  I was voted down, 3-2.  The other girl that voted with me, we made sure we stayed in the middle of everyone.  We were neither the first nor the last to enter a room.  We've seen enough horror movies to know that the stragglers are among the first to go!  We finished the tour and left without further incident.  The next day I drove home, and after I got home my mom called me, I thought to ask me how the house looked.  Instead, she was telling me that the police had just called her because they had caught some people who had evidently robbed several houses in this small valley and they confessed to taking things from my parents' house!  They were interrupted but came back, got a few things, but were spooked again.  When the police went to the house, everything was packed up to go.  They were going to clean everything out, dishes were on the counter, pictures off the wall, area rugs rolled up.  Not at all how it looked when I left.  It was with a certain amount of perverse glee that I sent the email to my friends to tell them my survival instincts were right on the money!

So flash back to the present.  My mom needs to check on the house because the summer season is approaching and there are a few small jobs that need to be done.  We drove up and started to get settled in the house.  I picked up the phone and it was dead.  Uh-oh.  Not a big deal, right? We have cell phones!  Who even needs a land line anymore?  Except their house is where cell service goes to die.  If you lean off the corner of the deck, you might be able to grab enough of a signal to make a call.  I used this strategy to report the problem with the phone line.  I laughed as I repeated myself louder and louder as if my volume could overcome the signal breaking up.   Here we were, the two of us, in this big remote house with no means of communicating with the outside world.  Ack.  The rational adult in me says that this is a safe area with low crime, the previous break in was truly a fluke, AND they never would have gone in a house that was occupied.  The not-so-rational scaredy cat in me shouted "RUN!"

Guess which side won?  The rational one.  I know, right, it totally surprised me too.  I settled into bed that night and went over my rational arguments for safety, prayed, read my book for a few minutes and drifted off to sleep.   I feel amazing for having overcome another fear related situation but don't expect me to be jumping out of planes any time soon!
Posted by Amy @amymchodges at 10:03 PM No comments: Links to this post